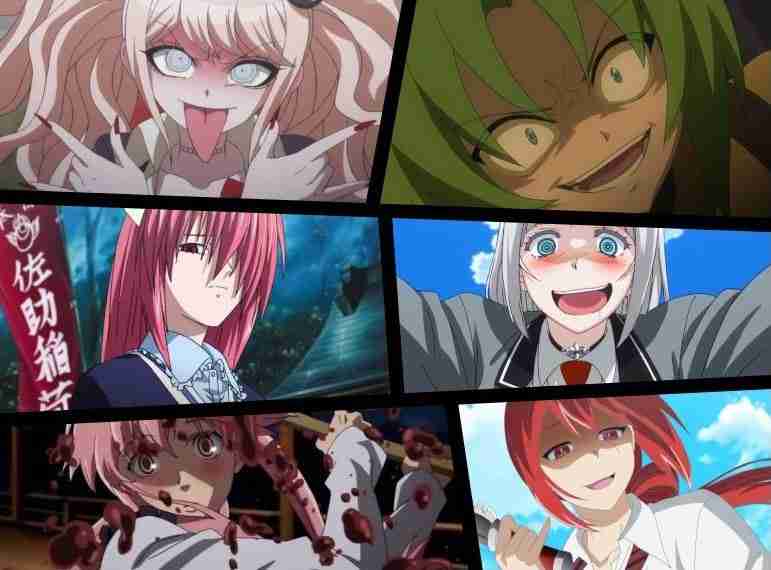 Hello, Alysers, I am excited to share with you the Top 10 Crazy Anime Girls. Once again, I have saved your time and have compiled for you a list of 10 Crazy Animes Girls. The list of crazy anime girls includes the best works that are as similar as possible in terms of genres, subgenres, and setting. If you disagree with any of the positions and think that some anime does not look like the original, then do not hesitate to share your opinion in the comments below. We always listen to our readers.

10 Crazy Anime Girls, You Must Be Very Scared of Haruhi Suzumiya from the anime The Melancholy of Haruhi Suzumiya. She is prone to unpredictable mood swings. She changes her hair according to the “color” of the day. She paints strange characters all over the school and spends time looking for aliens. But Haruhi Suzumiya, unknowingly, is a goddess who can change reality at will. So can a person really be crazy if the world changes in accordance with her madness? Is she in one place of reason in a chaotic world? The answer is the same: Long live Haruhi-sama. Anna Nishikinomiya from the anime A Boring World Where The Concept of Dirty Jokes Doesn’t Exist. She, strong, tough and unforgiving, is fanatically committed to eradicating obscenity wherever she hides. Without spoiling anything. let’s just say the most dangerous type of villain is the villain who has no idea what she’s doing.

Ophelia from the anime Claymore. In Claymore, the organization uses cold-blooded female warriors (titular claymores) to hunt down and destroy monstrous awakened creatures. Ophelia deliberately turns people into awakened beings, just to have something to kill. In her spare time, she turns her wild “pulsing sword” technique on humans and Claymore. Showing her disdain for weaker creatures by indulging her bloodthirstiness. Roberta from the Black Lagoon. Rosalita “Roberta” Cisneros became known as the Bloodhound of Florence when she was a hitman for Colombian rebels. These days she works as a maid for the wealthy Lovelace family. Although she is not very fond of cooking and cleaning, hurt one of the Lovelaces and Roberta will torture and kill anyone. Yes, including children.

Lucy from the anime Elven Song. She is withdrawn and sociopathic, killing freely and ruthlessly. She harbors nothing but contempt for the lower creatures who create monsters, but call themselves humans.

Haruko Haruhara from FLCL. She arrives from space in an ultralight Vespa with a rocket-firing electric guitar. This is madness in itself. But crazy is not just what you are – it is what you do. Therefore, she meets the hapless hero Naota, knocking him down and chasing him. And that’s what she does with people she likes.

Shion Sonozaki from the anime Higurashi When They Cry. Delightful Shion is a menace when it comes to pranks and a penchant for psychotic, murderous anger at anyone who stands between her and her beloved Satoshi.

Shiro from the anime Deadman Wonderland. She lives a happy life in a dangerous prison in the DeadMan’s Wonderland, oblivious to the horrors around her, content with candy. But don’t let her attractiveness fool you – an invincible, bloodthirsty killer lurks behind her smile, waiting to be released into the wild.

Share it with your friends and let us know what they think!

Did you enjoy our list? Make sure to check out our Top 10 Incredible Anime Heroines list and let us know what you think!

Hi i am the owner
[email protected]
http://Alysworlds.net